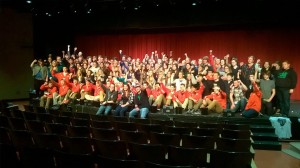 (We all) Rise Together co-founders  visit Door County in their work of education and information on the issues of addiction.

Kathy met Anthony and Doug at the State Mental Health and Substance Abuse Conference in October 2014. Finally, she thought a shift had occurred, like-minded people working together for change. Their opening remarks were “We don’t look like you”.  She responded with, “but I think like you”.

There were two other groups discussing openly the effects of addiction openly by recovering individuals and a family as one of the Keynote presenters.  A proposal has been submitted to the State to present panel style at the 2015 conference.  The hope is to work together as groups to recognize this shift.

AA celebrates its 80th Anniversary  1935-2015 of its successful work, anonymity, needed by some, is no longer going to keep this disease underfunded. That is the goal of A New Way.